Rising from survival mode to CEO: How one rootless entrepreneur made it to the top

Greta Bajrami is the CEO of Golden Group Roofing, has served on three industry roofing boards, and has been chosen Worcester Business Journal’s 40 under 40. But success did not come easy. In fact, there were days that she wasn’t sure she was going to survive. Greta sat down on a  Podcast with Rick Porter, host of the Founder’s Story Podcast. and walked him through how she went from waitressing double shifts to owning an award-winning multi-million dollar roofing company in just eight years.

Podcast with Rick Porter: “I just wanted to survive” 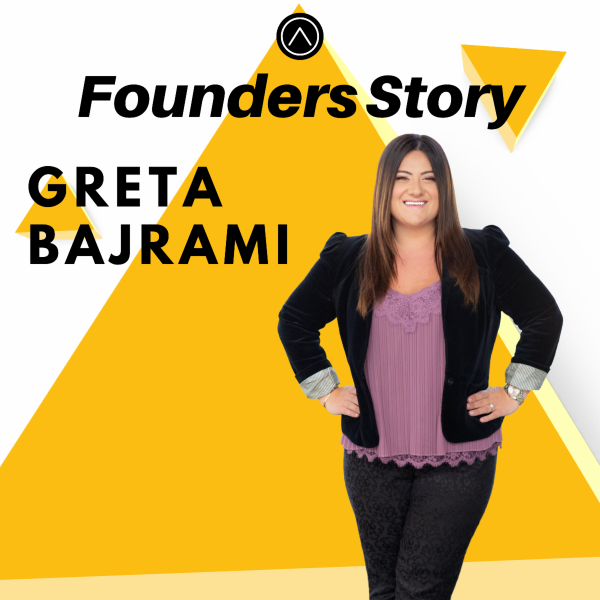 As a young Albanian immigrant, Greta was no stranger to adapting to new situations. Arriving in Worcester, MA  as a 10-year-old girl who didn’t speak any English, she had to adapt to the American way of life very quickly.

It wasn’t easy.  After being teased and going friendless, Greta would hide behind a tree in the morning to avoid going to school.  But her mother, a resilient former ER surgeon, wasn’t fooled for long, and promptly sent Greta marching off to public school, saying “You have to go and figure it out.”

And she did. But that wasn’t the only curveball in store for her.

After learning English and embracing school, Greta rapidly excelled in honors courses and planned her career in political affairs, having been accepted into Suffolk University.

Then at 19 years old, she found out that she was pregnant. Feeling the weight of disappointing her traditional Albanian family and the loss of her law school dreams, Greta was forced to once again to “go figure it out.”

Podcast with Rick Porter: The college class that changed everything

Determined to make a better life for their child, Greta and her partner switched plans. They enrolled in Worcester State University to stay local, while Greta also worked two jobs to pay the rent. Living paycheck to paycheck, she often wondered how they would survive. Maybe if she could just land a job as a restaurant manager, they would be okay.

Along came the business class that opened her eyes. The assignment was to design a successful business with everything carefully thought out – from finances to marketing to staffing.

It was in this class that Greta dreamed up the fictional Tiramisu Cafe. For her project, she conducted market research and created a viable plan for a thriving business. Pushed by her professor, she was forced to see herself as more than just a teen mom or a restaurant worker…but as a potential entrepreneur.

Exhausted from working multiple restaurant jobs while finishing her degree, Greta searched for a job that increased her income. She stumbled on a high paying job listing for a roofing foreman.

She had zero experience in roofing…but she did have project management, organizational, team building and customer service skills. So on a whim she applied for the job – and got it.

After a few years on the job, she saw all the shortcomings of a traditional industry that hadn’t evolved with the times – old school sales tactics, inefficient project management, outdated technology, and lackluster customer service.

She decided to go out on her own and launch Golden Group Roofing. Her supervisor thought she was crazy – how would a young female immigrant roofer with no roots in the community ever success with her own roofing business? He predicted that she’d be begging for her old job back within months.

Maybe so, said Greta, but she had come this far and was ready to see where this would go. If she could build a successful business model for Tiramisu Cafe, why couldn’t she do it for roofing?

“Everyone craves support… but it’s sad that we don’t get it.”

Armed with a business degree and her determination, Greta and her partner founded Golden Group Roofing. Unlike other roofers who stepped into an existing family business, Greta built everything from the ground up as best that she could.

Although they were experienced in their trade, Golden Group Roofing was a brand new company that didn’t have any reviews or referral sources. The nervousness set in as Greta wondered where they would get customers.

Then the first customer took a chance on them. Pleased with their roofing job, he gave them their first rave review. And it built slowly from there. Greta was thrilled to complete 15 new roofs in her first fall season in business.

Still, for the next few years, she mustered up the discipline to pay herself a low salary so she could increase Golden Group’s liquid capital. Slowly over time, she began to hire a bigger crew – which can be scary for a business owner to take on the responsibility of someone else’s livelihood.

Podcast with Rick Porter: Helping other entrepreneurs up the ladder

Eight years later, Greta is the CEO of a successful company with over 30 employees. Now that she has “made it”,” she’s ready to give a leg up to entrepreneurs who are looking for the support that she so desperately needed.

As a woman who always felt “rootless” and never really belonged to one group or one place, she was inspired to launch her Rootless Entrepreneur platform, where any entrepreneur or career professional could find the resources they need to make their dreams happen.

Filled with comprehensive blueprints on how to start a business in different industries, the Rootless platform also provides mini-courses and access to industry experts. No matter where you are in your business or professional career, you can find a home (and the support you need) on the Rootless Entrepreneur platform at www.rootless.com